I started flowers from seed this year, concentrating on "fillers" for floral arrangements. Both the Orlaya 'White Finch Lace' and the Chocolate Lace Flower (Daucus carota) have been growing, the Orlaya in bloom since late May.


There is a trick to harvesting both of these little beauties. Neither likes to be picked before its time. And its time consists of petals having unfurled in the case of the Orlaya, but this flower needs special treatment. First, take a container of water out with you so you can put cut stems right into the fresh water. When you're ready to use them for a vase, make sure you use floral preservative and take another cut before putting it in the treated water. Failing either can result in a wilt that cant easily be reversed.

The Daucus' readiness is just a bit different. First of all, it must be at a stage where the flower cluster is flat. If it's in any way cupped, don't pick it. It will wilt. Chocolate lace flower is in the carrot family, and resembles Queen Anne's Lace in form.

The Daucus also likes to be in water to which floral preservative has been added. This particular variety blooms in a range of shades, from pale rose to deep burgundy.


Although I started seed for both flowers at the same time, the Daucus is just hitting its stride. If it carries on through fall, I imagine it would be great with Dahlias and asters. 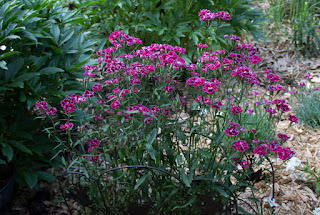 Flowers for Spring Bouquets: You Can Grow That!

It's slightly possible I have more vases than most people. I don't spend a lot of money on them because I find many of them at my local resale shop and at other bargain-hunter haunts. Those I buy typically come from public garden gift shops, and at clay artists I find while on vacation.

Whenever I have a few flowers blooming in the garden, I start bringing a sampling in for a stint in a vase. It doesn't matter if their stems are just 4 inches long--I have just the right vase.

Narcissus are famous for fouling the water the're in. Their stems give off a substance that will shorten the vase life of other flowers. It's recommended they have their own separate vase. But I love them mixed with other flowers.

One of the little combination vases I have is the Pooley Puzzle, which features a clutch of tubes that allows you to put different types of flowers, no matter what their vase life or reputation. In this vase, I was able to mix small and large-cup daffodils with blue and white Muscari and Grecian windflower (Anemone blanda).

Luckily, I have hundreds of daffodils throughout all of my garden beds so I can cut lots. I've found it takes quite a few stems to fill a vase. I have a little pitcher that works well for holding shortened stems of daffodils. To make them look like a full bunch, I cut the stems around 6 to 8 inches long before arranging them in the vase.

Whether you like to cut bouquets or enjoy the flowers in the garden, make sure to choose early, mid- and late-season varieties. I have a few new varieties, including Berceuse, considered a mid-season variety, this year opening around mid-April.

One of the longest-lasting bouquets for mid-spring contains Epimedium, Checkered lily (Fritillaria), Lenten rose (Hellebores) and Viburnum. The first to burst its flowers was the Epimedium, but I just snipped the stems off and left the leaves, which remained as perky as the rest of the stems in the vase for a solid week. I changed, or at least topped off the water every two days.

Hellebores that are freshly opened don't last very long as cut flowers. I made sure to pick the those that had already dropped their stamens, after which they typically take on more of a green hue, but they're just as pretty. One thing I learned is that if you pick a stem of Helleborus that includes a spent flower and a bud, the bud opens slowly in the arrangement and stays fresh for a few days rather than several hours.

Cutting flowers is good for you!

Making bouquets is also good for the plant. Here is why:
Deep rosy-pink Asiatic lilies are blooming in two places in my garden. I wondered if they were the same variety and patted myself on the back for coming up with a simple test: I'd cut them and put them together in a vase! Fortunately or unfortunately, they're not the same. It's subtle, but in the photo you can see that one variety is more peachy than the other. I don't think the colors detract from the bouquet, expecially since I've added some true pink and lavender-pink to the mix along with white. 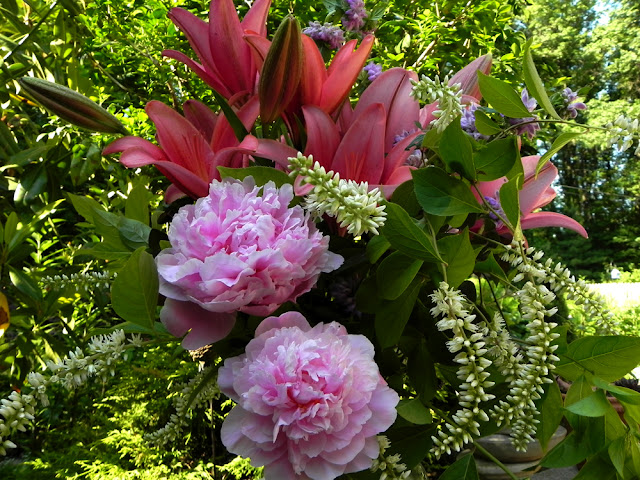 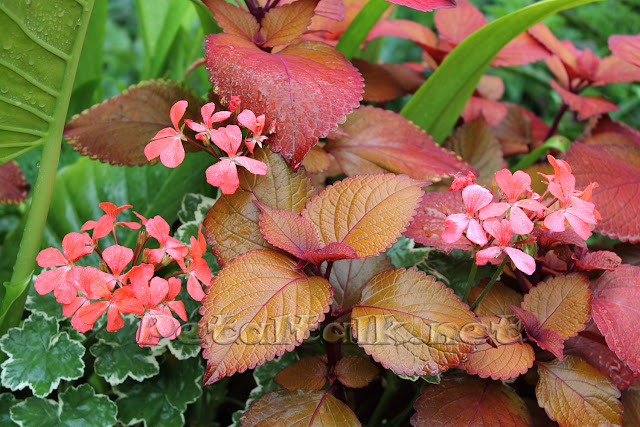